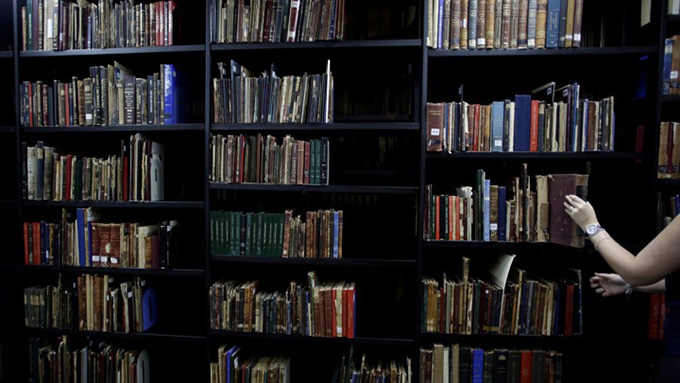 One of the few things every school must have is a library, it’s literally written into the accreditation rules. A century ago this made sense as books were the primary means of retrieving and storing knowledge. If you’re reading this, then you know books have taken a back seat to the internet, aka “the font of all human knowledge.” Our schools which have been around a century or more have huge libraries, so they can be excused for having so much “wasted” space on a bunch of old tomes, but it’s interesting to watch these schools struggle to come to grips with modern reality: The Books of College Libraries Are Turning Into Wallpaper The author of the above piece is the “Vice Provost for Information Collaboration.” I’ve mentioned many times the real issue in higher education expense is the proliferation of administrative positions, as evidenced by the ever more splendiferous titles they have. A good rule of thumb for fixing higher ed is simply to eliminate the positions with titles twice as long as the name of the holder. The holder in this case was a scholar though he long ago abandoned such pursuits in exchange for the kind of money most Americans could only dream about making. Buried in a slide deck about circulation statistics from Yale’s library was an unsettling fact: There has been a 64 percent decline in the number of books checked out by undergraduates from Bass Library over the past decade. Wow. That’s a huge drop in use…the gentle reader can be certain there hasn’t been a drop in librarian positions, otherwise there wouldn’t be a need for a position titled “Vice Provost for Information Collaboration,” i.e., “librarian.” We really should ask why the people running our schools get paid salaries to rival CEOs of fabulously successful corporations, yet run things so inefficiently. Anyway, the article cites around a 75% drop in book use by students over the last 20 years. While the internet is cited for the drop, I maintain there are other factors, and I’m not simply talking about how students aren’t assigned nearly as much work as a score of years ago. What kind of drops are we seeing in other populations on campus? Grad student use is down 61%, and faculty use is down 46%. Sadly, such statistics in a vacuum are hard to interpret—if there’s been a huge increase in faculty or grad students (there hasn’t for faculty to be sure), I can’t make a fair comparison but let’s just assume all these sub-populations have been stable…do so and we again have evidence that many students are buying their papers, more so than faculty or grad students, anyway. Of course, admin aren’t paid to think about such things, so let’s hear the musings of the Vice Provost for Information Collaboration: At the same time that books lie increasingly dormant, library spaces themselves remain vibrant… Well, he makes sure his job is secure…making sure to emphasize the library is valuable even if the books aren’t. That’s some good information collaboration there! Our research library…has also seen a surge in group work. In other words, the drop in use per student is probably much larger. It’s been a while since I’ve mentioned the huge emphasis of “group work” on campus, but this is just another way education is debased. We all know that “group project” just means some students in the group do all the work while one or more students do nothing and leech off the work of the diligent students…because we’ve all been there. But group projects are a staple of college courses now, those courses which still dare to assign work, anyway. Statistics show that today’s undergraduates have read fewer books before they arrive on campus than in prior decades, and just placing students in an environment with more books is unlikely to turn that around. The average college freshman reads at the 7th grade level, so I accept those referenced statistics. The sharp decrease in the circulation of books also obviously coincides with the Great Recession and with the steady decline of humanities majors, as students have shifted from literature, philosophy, and history to STEM disciplines—from fields centered on the book to fields that emphasize the article. Ok, I’m probably reading too much in the statistics above, but this whole bemoaning of the humanities is smoke. Our student loan scam has caused tuition to inflate so that only a fool would invest tons of money into a humanities degree of little value (the schools still get plenty of fools, however). If anyone in higher ed is serious about increasing humanities majors then there’d be real effort to lower tuition. Perhaps by reducing excessive administrative positions? What would the Vice Provost of Information Collaboration say? Do I hear crickets? (I’m posting because Monday I get to have the first of two (or three, or four…) complicated lung surgeries; as per all cancer treatments, it’ll be painful, involve months of misery, and the more it fails the more money modern medicine makes.) www.professorconfess.blogspot.com