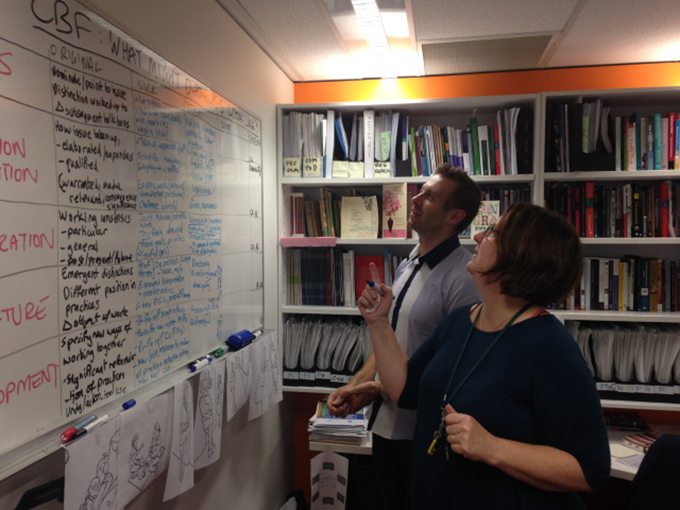 The view from the other side: Teena Clerke Reading Nick’s reflections, I am reminded of my various experiences working on other people’s research projects. Unlike Nick however, I came to academia and educational research as a practitioner, not in education, but in graphic design. I had been self-employed and began teaching in the mid-1990s, which led to my enrolment in a Masters degree and then PhD in adult education. My supervisor was Professor Alison Lee, who sadly passed away in 2012. At the time, it amused me to hear Alison refer to my PhD as ‘my work’. I was not being paid to do this ‘work’. To me, it was ‘study’. Alison co-opted me into the business of research in 2007, the second year of my PhD, where I was paid as a jobbing researcher to do what has sometimes been called the ‘grunt’ RA work. In this case, it meant following Alison’s directions as to what to do, where to find information and how to manage, analyse and extract from the analysis something significant that could be published. Together we wrote my first published, peer-reviewed paper and co-presented at a national conference. Yet I felt like a free loader, because Alison’s ideas, direction and writing got us there. Between then and completing my PhD in 2012, I worked on a range of small, unfunded research projects for various faculty members. Different ‘bosses’, different purposes, different methods, different audiences. But the same feeling. Although I was ‘doing’ research, this was not my work. I was not really a researcher. In 2011, Alison encouraged me to apply for the RA position on Nick’s project, which involved long-term observation methods called ethnography. I didn’t know it then, but it was also Nick’s first experience of having someone work on his project. Twenty years apart in age, it was Nick’s first big funded project, while I had run my own businesses, changed careers several times, and was finalising my PhD as Alison fell ill. But I had no experience in ethnographic fieldwork, nor in working for such a boss, who held higher expectations of myself then even I had! Yet similarly to his experience with Lynn, Nick gave me ‘freedom’ to develop my own ethnographic sensitivities working on his project, while learning the importance of research administration and team communication. These experiences were documented in a book  (for which I’m first author – an example of Nick’s high expectations and trust), and encouraged by one of the reviewers, it includes my reflections on the ‘hidden’ gender dynamics of an older woman working with a younger, more experienced male researcher. Five years out from my PhD and having worked on a multi-member and institution research project in between, we are completing the third year of Nick’s current project. Nick now trusts my research instincts, while mentoring my writing practices. There is mutual respect for our differences and leeway to negotiate and navigate compromises. I can say that it feels more like working on our project than the first one. Not quite, but almost. Our co-work began with me seeing Nick as some kind of research guru, freakishly good at fieldwork, analysis, writing and teaching. Now I see that he is human too. And he cares about my development as a researcher. Through our collaboration, my identity as researcher has grown to the point where I work with Nick on the project, and I also work on other research projects. My professional instincts honed in other careers guide me in navigating the multiple and complex uncertainties in research, not the least of which is not knowing what is to come after December as I mourn the loss of our partnership. Author Bios: Nick Hopwood and Teena Clerke  are from the University of Technology Sydney