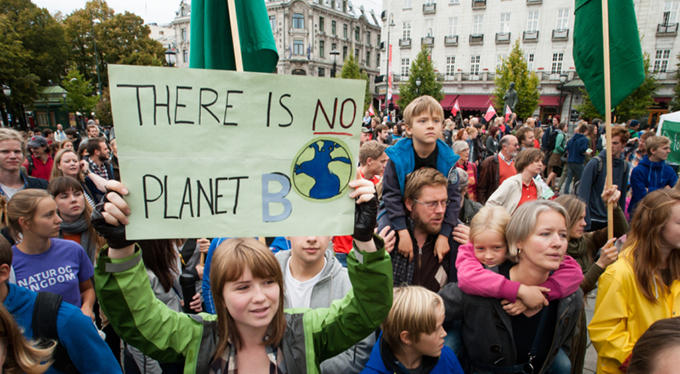 We are striking from school to tell our politicians to take our futures seriously and treat climate change for what it is – a crisis.

By the end of this century, average temperatures on the surface of our planet are predicted to be more than two degrees Celsius or higher than today. The average level of the ocean surface could be more than a metre higher. Such changes will challenge the ways we live now. There are plenty of evidence-based projections of future climate readily available, such as the work of the Intergovernmental Panel on Climate Change (IPCC). But then there are denial, scepticism and misconceptions about climate change that confuse people and create unnecessary fear and anxiety, especially in school-age students. Young people are still developing their ability to critically reason, contextualise and realistically assess risk. They are vulnerable to emotion-charged information and less likely to understand the possible agendas of people with differing ideas.

Fear and anxiety about climate change

Anxiety is a form of fear we experience when a threat is not immediate or catastrophic but has the potential to be so. It can be useful when it mobilises us to act on a problem. Two important criteria underpin both fear and anxiety. You find yourself faced with a potentially dangerous situation that appears to be uncontrollable and unpredictable. Either unpredictability or uncontrollability on their own can lead to a fear or anxiety response. In concert together they form a perfect storm of stress and confusion. Looking at climate change through this emotional lens, we can certainly see the element of uncontrollability. Some climate scientists and activists believe we have started a chain reaction that is almost irreversible. Most climate scientists are careful not to talk about predictions of future climate and favour model-informed projections. That still gives us an idea of the nature of our future world, at least for most of the rest of this century. This knowledge encourages the perception that we can control or mitigate certain aspects of climate change. From a human point of view, this brings us some relief. But the anxiety related to the impending climate change should not be underestimated. Some researchers list it as a top concern for population mental health. It is therefore not surprising that many of our younger generations feel particularly anxious about the impacts of climate change. On the one hand, teenagers are especially sensitive to fear-based messages as they have a tendency to catastrophise – they imagine the worst possible outcome. For example, in the last century, it was the threat of a nuclear war that caused anxiety in many children. Fast forward to today and climate change is seen as the next big threat for future generations.

How to ease the anxiety

Today’s school students know they will inherit the fallout of climate change. They will live to see their children and grandchildren doing the same. So they have reason to be concerned, and anxiety may mobilise useful action. So what can we reasonably say to teens who are feeling shut out of the debate and experiencing heightened anxiety about their future? Adaptation is one of the most valuable skills of the human species. Understand that we can and must adapt to the impacts of climate change. Climate change isn’t new so we will need to work together to care for the Earth and one another. Importantly, taking an interest in understanding why and how things happen helps us to manage them (rather than sticking our collective heads in the sand and engaging in denial). While there is genuine cause for some anxiety, a fear reaction that is out of place or disproportionate to the actual threat serves very little actual purpose other than leaving a person in great distress. Listening to the valid concerns of school students, and engaging them in discussions about the mitigation and adaptation strategies we will need to adopt, will go some way towards easing their fears and anxieties. Author Bios: Rachael Sharman is a Senior Lecturer in Psychology and Patrick D. Nunn is a Professor of Geography, School of Social Sciences both at the University of the Sunshine Coast